The Muste Institute provides grants, sponsorships, and educational resources to hundreds of grassroots projects around the world. We fund innovative organizing, often with seed funds that give a necessary boost to bold ideas. We also provide affordable and collaborative space to a dozen or so groups in New York City.

In the words of our grantees:

From Chiapas to Palestine, I’m impressed by what humble people are doing, with virtually no resources, in the face of devastating inhumanity. The Muste Institute funds grassroots, creative, enthusiastic groups that don’t shy away from a magnitude of challenges and, instead, put all their bets on making “miracles” with few resources but ample conviction. Maria Delgado, Uruguayan Human Rights Activist

Muste’s shared space is a place for NYSLC's undocumented youth to organize: unafraid and unapologetic. We host monthly workshops, training on speaking to media, scholarship application assistance, and legal clinics. Our members know that coming to our office means coming to a safe space. Funding from the Institute helps us fulfill our commitment to each other to keep the NYSLC open, regardless of uncertainty and threats in the political moment. We will not step back - instead, we will continue to organize within the power of our youth! New York State Youth Leadership Council
See Full Article >>>>

How We Do It

This section should really be called how you do it: It is your contribution to the Muste Institute that provides funding to organizations meeting a sudden need that exceeds their capacity ; it is your donation that offers shelter and resources to those newly-endangered by their identity or activism; it is your gift that allows our staff to work with groups and activists seeking collaboration. Every resource we provide is the sum of our community's generosity. Please give, or give again
DONATE>>>>

In the words of our grantee, 350 Seattle: To change everything we need everyone. For those of us who have never attended a rally, joined a picket line, or called for social change, this is the time to get involved – pick something and fight for it. For those who have committed our lives to radical resistance, it has been a time to fight harder, to extend our reach. From our collaborative office and meeting spaces to our far-reaching grantmaking programs, the Institute supports and sustains individuals and organizations fighting together for a just future.

The A.J. Muste Memorial Institute was established by members of the War Resisters League to offer safe space to radical organizations threatened by government surveillance and harassment. From its start at a borrowed desk run by volunteers in lower Manhattan,  the Institute gained tax-exempt status in 1974 and began raising money to help grassroots projects through grants and fiscal sponsorships. Both a shelter and a hub, the Institute has grown into a non-profit charitable foundation for innovative organizing across the nation and the globe.

If you are an organization in need of support, or a donor able to help us provide it, we welcome you to our community of undaunted activists.

Mumia Abu-Jamal talks about AJ Muste and his legacy:

Muste was a central (yet largely unknown) figure who introduced a young college student and seminarian named Martin Luther King, Jr. to the notion of nonviolent activism and, by doing so, changed him and, through him, the entire country.

When Muste first presented his views to King, the two men fell into a “pretty heated argument,” before King could agree. A.J., not Gandhi, was the first to influence King in his turn toward nonviolence.

Muste was a deep and tough thinker. He believed that when disparate groups learned to work together they could influence social change. He was a tireless organizer who built coalitions and could bring those groups together like no other.

This has been reflected in the A.J. Muste Institute's support for the underpinnings of diverse grassroots campaigns – not just to end the death penalty, but to oppose militarism, defend the environment, confront racism, and build social justice. For Muste, and for the Muste Institute, activism from the ground up is the fundamental key to organizing movements that can make social change into a reality.

Political dissent is never easy – it wasn't in the 1940's when Muste was debating with Martin Luther King; nor is it easy now.

But it is necessary. 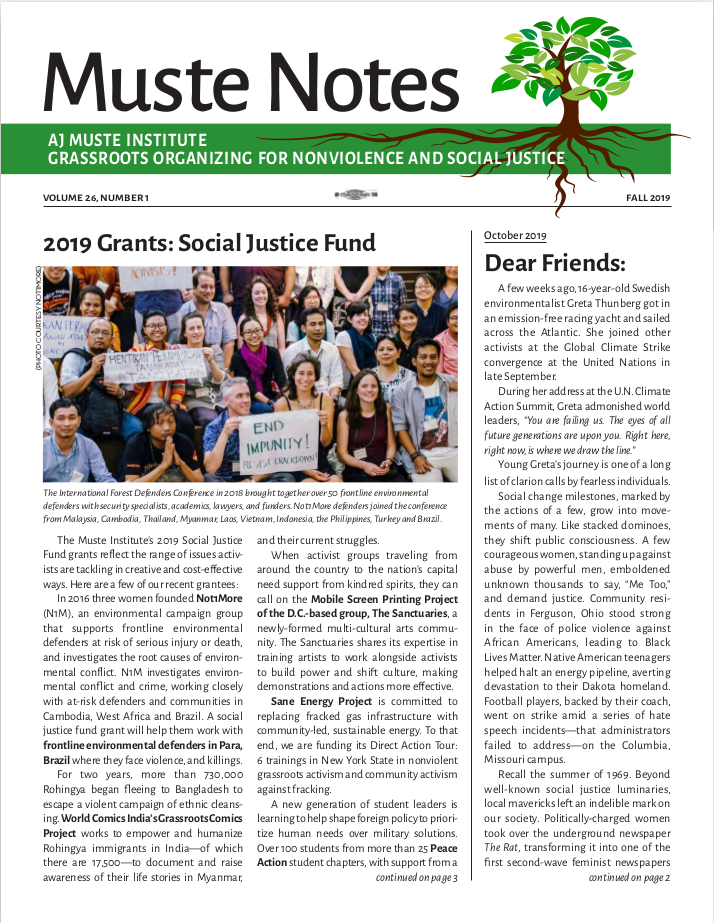