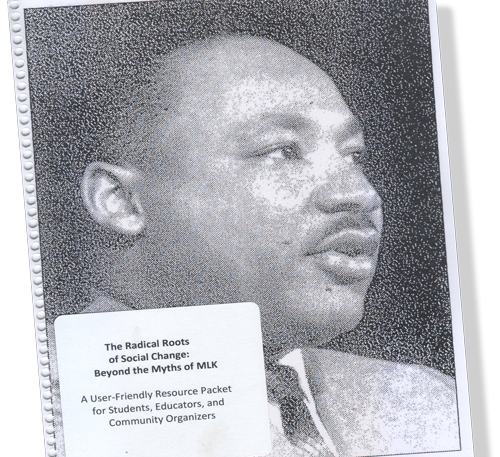 The Radical Roots of Social Change: Beyond the Myths of MLK is a user-friendly resource for students, educators, and community organizers. It debunks the myths portraying King as a dreamer who can be followed only if one commits to a path of sainthood that MLK himself never followed. In focusing on three aspects of MLK’s life and legacy, the Muste Institute hopes to assist others in building effective social justice movements.

MLK had social roots in his Atlanta, GA upbringing, religious roots in Black Baptist traditions, and political roots in the teachings of Gandhi. What is lesser known, however, is that the individuals and organizations who most helped bring these three key elements together centered around a small orbit of radicals associated with the Fellowship of Reconciliation (FOR) and the War Resisters League (WRL). During King’s formative years, Rev. A.J. Muste, the elder of this group and a leader of both FOR and WRL and of significant labor struggles, was joined by Bayard Rustin, Glen Smiley, Ella Baker, and a few others. Muste protégé Barbara Deming wrote her own classic essay on the need to balance our newly revolutionary “experiments” in nonviolence, she added a strong feminist and women-centered consciousness to the mix.

¡En español!: MLK in Puerto Rico and Beyond

One of MLK’s least-known travels involved two trips, taken in 1962 and 1965, to the island archipelago of Puerto Rico. Invited by the Fellowship of Reconciliation, MLK spoke at the University of Puerto Rico and what is now the Interamerican University at San German. Toward the end of Dr. King’s presentation on the campus of Rio Piedras, he compared the plight of Puerto Ricans living in the northern states of the US with that of African Americans in the south. He addressed an audience member’s question about the efficacies of violent tactics and the discipline of nonviolence. As Dr. King continued reviewing strategies and tactics, he added that in many ways the struggle to get rid of the colonial power of the USA in Puerto Rico was “much more difficult” than the struggle to “bring about integration.” MLK noted: “There is a difference between integration and independence.” In the case of integration, “you are not driving out a foreign invader. You’ve got to live the next morning with the very people you are struggling with at this hour…

On the 2019 special MLK edition of Law and Disorder Radio, producer Heidi Boghosian welcomed author/organizer Matt Meyer and two special guests in an extraordinary inter-generational dialogue on the “Legacy of the Radical Dr. Martin Luther King.” MLK youthful colleague and member of the Student Nonviolent Coordinating Committee Ruby Sales joined Rev. Dr. Emma Jordan-Simpson, Executive Director of the Fellowship of Reconciliation (FOR), former New York director of the Children’s Defense Fund and Senior Pastor of Brooklyn’s Concord Baptist Church. Dr. King’s close ties to the FOR and to A.J. Muste began during the Montgomery Bus Boycott.

While we include several thought-provoking questions in each section, the overall discussion points fall in this framework:

Why might investigating the life and work of the Southern-based, Black-led freedom movement—and the true, revolutionary legacy of Rev. Dr. Martin Luther King, Jr., Minister Malcolm X, and others of their generation—be useful today?